The grenade we ordered arrived in time for the first meeting with the band. We're going to do a test run of the video in Mark's basement and then film the actual video in a live room of a recording studio the band has hired for a weekend. We're still going to use the projector and I brought some stock explosion footage samples I downloaded from a really really great website called Detonation Films (see below post). We put the stock footage through the projector and projected the explosions and flames on to the band members. It looked good, I hope we're on to something here.

We also came up with a basic video plan, which is currently open to change, so I won't go into any details until we're finalised. But basically we're going to shoot the video entirely in the large white room of the studio, including the story segments.

Also, we have an experienced camera guy on board who is going to supply us with a high quality camera to use. The band would like to try and get the video some airplay on the television, and to do so you need to meet a minimum spec which my consumer camera doesn't reach. So I will get to play with some big boy's toys!!!

Here's our brilliant grenade prop. It's cast from genuine US WW2 moulds and has a removable pin and handle: 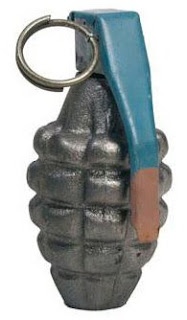 I was nervous carrying this around London in case it rolled out of my bag and I got myself killed by armed police. I also thought about using it to demand a pay rise at work but thought better of it.
Here's where I bought the grenade from, it's all legal and above board. It was £18 including delivery and came really fast. They sell a lot of very interesting stuff on the website, great props.
SURPLUS AND OUTDOORS SHOP
Posted by BrindleFish at 11:20