Time for something a little different. Every now and then I'm going to post about a film I think people should see, one that they possibly haven't. I'm not going to bore you by reviewing everything I watch, these posts exist only for special cases.

Here's a film that - rather unfairly - slipped by cinema releases, wasn't well marketed and faded into the background of DVD sales. Unfortunately the trailers for the movie are loaded with spoilers and ruin pretty much the whole film so I beg of you, don't go looking for a trailer. Just watch the damned movie.

Tucker and Dale (the always-awesome Alan Tudyk and Taylor Labine) are two good hearted guys who have bought a ruined old cabin surrounded by woodland, with the dream to restore it to a beautiful holiday home. On their way to the cabin in a dilapidated pick up truck, they bump into a group of obnoxious college students who are going camping in the very same woods and thus begins a series of grossly misinterpreted meetings as the college kids become terrified of the genial pair, mistaking them for crazy murderin' hillbillies. As the misunderstandings pile up, Tucker and Dale find themselves in a very sticky, gory situation. 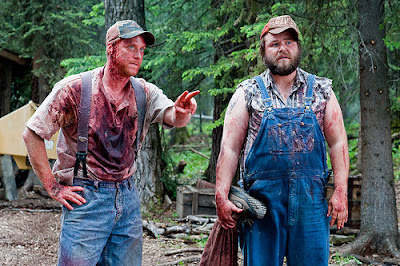 It's a self-reflexive play on the killers in the woods theme, and anyone who has seen the Texas Chainsaw Massacre or The Hills Have Eyes will recognise the events as they unfold, except instead of insane homicidal maniacs we have a couple of sweet but socially awkward blue collar boys just trying to fix up their holiday cabin and perhaps have the opportunity to talk to some pretty girls, if that's too much to ask.

You don't need to be a horror buff to enjoy it. The plot is smart enough and the writing is frequently funny. The two leads are likable, lovable even. Tudyk (Firefly, Dodgeball) is a joy to watch as Tucker, all too aware of how things are spiralling out of control but powerless to stop events. Labine steals the movie as sweet but slow Dale, who has the best intentions in the world but keeps making things worse. Highly enjoyable fun and gruesome giggles.

It's dead cheap, though it only hit DVD in September. I bought the Blu-Ray even though it doesn't have many extras, just the commentary and photo gallery, but I wanted to support the guys who made it because it sucks that a great and funny film can risk sinking without a trace. This film is actually my inspiration for starting these "recommends" posts, I hope you get to see it, and I hope it makes your smile muscles hurt as much as mine did!

Check out the reviews on amazon -

Tucker & Dale vs Evil on DVD

Tucker & Dale vs Evil on Blu-Ray

And here's the IMDB page.

Just to re-iterate, If you're going to watch it, don't go near a trailer!
Posted by BrindleFish at 15:42