New headphones on the way!

I managed to get a really great price on a set of monitor headphones the other week. Something I've been after for a long time. I'm finding that my everyday headphones just aren't cutting the mustard when it comes to picking up all the audio through a mic, plus they don't block out external noise very well, and the lead is too short when I'm plugged into the camera too (admittedly a problem easily solved with an extender lead). I plumped up for the Sony MDR V600, the cheaper version of the MDR V6 (the industry standard monitor set which is out of my price range). When they finally arrived, they were already broken. I got my money back but I felt a bit cheated. I logged back online and I saw that Amazon had the original MDR V6- previously unaffordable - reduced to a really reasonable price. I could - theoretically - afford them. It would leave me broke for the month, but having these phones would be such a boon not only to filming but also to editing. I've wanted a good set for so long! So I've taken the plunge. 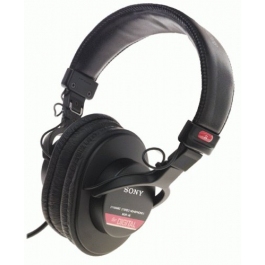 The phones are pretty much the benchmark phones used for audio work. They don't colour the sound or emphasise the bass like many consumer headphones, they give you the pure unaltered audio, which is important when you're mastering sound. I've had a play with them before, the build quality is sturdy and they feel really nice on the head. The lead is "curly" like a telephone lead so it has some give and stretches far. It won't just wrench the phones off your head when you take one step too many away from the camera. Most importantly, the audio quality is stellar.

The price on amazon is good (£85 - they are often up for over £120). If you want to take advantage of it yourself, get there through this link:

Do you use Amazon?

I'm an Amazon affilate so if my wafflings persuade you to buy anything I get a little kickback. It's money I can put towards tape costs or buying a new external hard drive! If you're feeling super nice, use the search box on the right hand side of this page next time you order anything on Amazon. If you get to their site through my page then anything you buy nets me revenue, and every little bit helps! It's a way that you can really help me out and you won't need to do anything out of the ordinary. Hell if you're feeling amazingly nice, you can bookmark my blog for easy reference. Well, it can't hurt to ask :-)

Still putting the Houdini footage together from Soup Studios. Once that's done I'm going to start moving over the captured footage from the New Project, it's still sitting on tapes unviewed and untouched! It's going to be fun putting a narrative together again after working with gigs and performances. Got a lot of good footage from Frazer's place in Watford, I'm excited to see it.

These phones are now UNDER £70 on Amazon. I'm a chump for not waiting longer. But this price has never been better, that I've seen. Get them!