Boppy the Cat Actor, The New Project and Looking Forward.

The day started ominously with a derailed train cancelling all trains to Watford, but one scandalously expensive cab ride later, Mark and I arrived at Frazer's with a car full of gear. After a slow start the ball was soon rolling and we managed to film half the entire film. We got pretty much everything in the bag that we planned to.

It was one of the better filming sessions I've ever had, it was relaxed, we had the house to ourselves, the street was quiet and we took our time with everything. It was a very collaborative day, with Mark Frazer and myself all pitching in ideas and coming up with new angles and ideas. Filming Frazer's cat Boppy was a lot of fun, he's a gorgeous, friendly ginger tom who enjoyed strutting his stuff around the house. It was nigh on impossible to get him to do specific things, but hey -  that's cats! We knew he wouldn't be learning any lines!

The whole shoot went smoothly but slowly, and was a very relaxed affair. We wrapped up as the evening was beginning to arrive in earnest, and arranged transport home. It wasn't until I got home that I realised we never actually stopped for food (a perfect opportunity was present when we watched back the footage but I was so focussed on the filming I wasn't thinking about stomachs) and we had subsisted the whole day on biscuits and jaffa cakes. I got home, nauseous as hell from the long car ride (which was unusual as I never get car sick) and I literally collapsed, mentally and physically exhausted. I hadn't felt the torpor hit me until I stopped moving. Dee had made a great curry which I gratefully devoured and then I went straight to bed, leaving lighting bags and suitcases where they fell (gently).

I've since got the footage on to the computer and I've started to put the pieces together. It certainly looks better than average, although of course I'm already seeing improvements I could have made on the day. This should help inform me when we shoot the second half of the short.. I've got the basic scene together from my current footage, it's quite underwhelming but I haven't really chopped away at it yet or tried to edit it into shape, so of course it will feel flabby and lacking any drive at the moment. I've got some background audio to add too, as well as some basic foley work which could be fun!

So, Friday was the big debut of my new lights and it went great. It's been a long time since I've had control of powerful lighting and we were able to use a combination of the new lamps, natural light and household lighting to bring the scenes to life. Good lighting makes a world of difference, I look forward to getting more practice. At the moment I'm still a beginner, and I've noticed that it is very easy to overpower the camera with the lighting which can lead to scenes looking like they are taking place under floodlights. You can dial it back a little in the editing stage, but you can't perform miracles. I've picked up a great book called Painting With Light, by a famous cinematographer called John Alton who worked on a number of classic noir movies and was a pioneer of cinematic lighting. 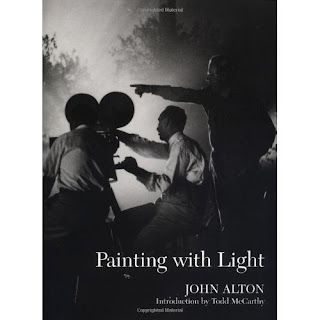 It is written from a different era, so there is a lot of information about studio lighting of old (olde?), but it's highly informative so far, I haven't felt the need to skip anything. The link above will take you to the amazon UK page if you want a look for yourself. I'm hoping the book will teach me a thing or two and I'm already excited to apply what I will learn. While I enjoy my cycle commute (most days!) I am sad that I no longer get to read on the train to work. My books are all going unread!

This Friday I'm going with Andy from Syncrovise to shoot a product information video, my first "offical" venture. We're going to be filming a how-to about fitting bathroom seals, a nice simple shoot that shouldn't prove too taxing (best not speak too soon) and will end with a slap-up dinner at Andy's place. Sounds like a plan!

I've been selling some of my Xbox 360 games this week. I've been a gamer for years and I've owned many many games, but a few years ago I had to start cannibalising my own collection in order to afford new games, so I never have any more than a few games at any one time. Although it feels good to get rid of the clutter, I still feel a pang of sadness when I sell a game on. Especially these last few. I am genuinely sad to see them go. Sliding them into their bubble wrap envelope, having one last look at the artwork, remembering the good times. It's unpacking a new game but in reverse. They were games I had been following for months before their release, I only bought them a few months ago, had loved playing, but I need to sell them on just to stay afloat. To be honest, they are games I probably wouldn't be revisiting any time soon, I have Skyrim now and that is literally the only game a human being needs. After that I've got Arkham City, the new Batman smack'em'up. I'm set for a good long way and won't be needing to retread past conquests. Selling them on is logical, but knowing I'll never play Saints Row The Third again leaves me sad. I make no apology. I love video games. Always have.

But on to bigger brighter things. Roll on Friday, roll on the food, and roll on the weekend!
Posted by BrindleFish at 16:58