Well, the showreel was assembled but sadly the opportunity that lurked on the horizon has darted off into the distance for now, but never mind! While the current project slowly bubbles away in the background a new video-making opportunity has come knocking at my door.

Owen - friend, librarian, beard owner and all-round good guy - is a member of the team behind the Plumstead Make Merry festival. They also have a hand in other events such as the upcoming Three Sided Football tournament and it seems that the tournament is a great opportunity to get some video up on the website. It's also a great opportunity to answer the question: What the hell is three sided football?!

For those not familiar, three sided football is a game in which the typical "us against them" confrontational nature of two-sided football is replaced by a strange mix of game theory and tactical play. It is played on a hexagonal pitch with three goals and three teams. 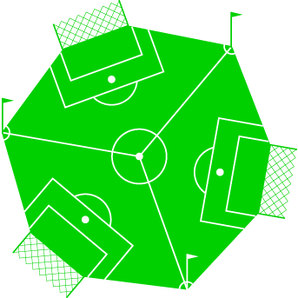 The winner is not the team that scores the most goals, but the team that concedes the least. As one team starts to gain a lead on the other two teams, it is in those team's interest to team-up against the current leader. Allies become enemies become allies, with allegiances constantly switching as each team tries to keep the ball out of their own net. It's a fascinating concept and I can't wait to see a game in action. As a video project I imagine it will be a lot of fun to create and I'll be working closely with Owen at every stage to bring it together. We're going to film the tournament and also some talking heads so that we can not only show you the game, but also put it in context and explain how it works!

For more about the philisophical roots of the game, check the wikipedia page.

For now, it's time to crack on with the short film for Mark and Frazer, I need to finish that first! Ah, projects, so easy to start, so hard to finish! It never quite feels perfect.
Posted by BrindleFish at 17:28