Dee and I took a few hours out yesterday to record a list of noises for an upcoming project. We needed things like doors closing, fridges humming, bottles clinking. Nothing too exciting.

I have no devices specifically for recording audio so I used the Canon XL1S camera. I dedicated a miniDV tape specifically for foley purposes. Basically I'm capturing video but with the lens cap on, as all I care about here is the audio. I didn't use the onboard microphone that comes with the XL1S but instead a nice sennheiser boom/shotgun microphone that was donated to me a few years ago. It has a pistol grip and rubber dampers to prevent sound or vibration travelling up into the microphone and a removable fluffy windguard so it can be used outdoors 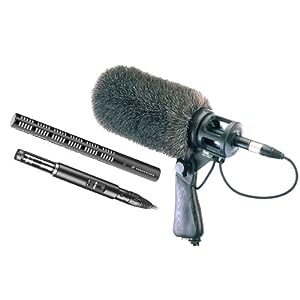 I used my recently bought headphones plugged into the audio output of the camera so I could hear everything the microphone was picking up. I'm always suprised by the intense sensitivity of the microphone. You can hear everything, from planes and vehicles going past to neighbours squabbling, cats meowing from the other side of the house and boilers running. If the microphone cables knock or drag then that is picked up as a loud noise. It's imperative to be as graceful as possible while holding the microphone, constantly being aware of the cables of the microphone and of the headphones, which are all plugging into the same area on the back of the camera so they do tend to tangle with one another and create noise. Then there is the camera itself, it's heavy and cumbersome and at times it was difficult to hold the camera, operate the microphone with care and also to keep an eye on the audio level meter which is on the camera body. It never became impossible but it was frequently tricky.

My favourite moments - standing with Dee in the sunny garden recording outdoor ambience. We took turns with the headphones and you could hear distant birdsong, rustling leaves, and bees buzzing past the microphone in flight. It was really beautiful. We weren't even recording at this point, we were just listening. I also loved recording the freezer - once the door was opened you could hear all of the ice shifting and crackling as the room temperature air mingled with the cold air. It sounded like being inside an iceberg. You can't hear it with the naked ear, but with the microphone it sounds amazing.

We got half the list recorded and uploaded. Next step is recording the rest of them, then getting the sounds into the short film.