Today was dedicated to me getting used to the new camera and perhaps shooting some models and miniatures at home that would later be spliced with footage that we would shoot over the rest of the weekend. The camera arrived late last night and we picked it up from Mark's place. As before, Mark had hired a nice camera and some good lighting to help the video look a little sharper. As ever, I am grateful for the opportunity to play around with new gear and find my way around new equipment. I always feel like I learn a lot from it. The camera for this shoot was the Sony HVR-Z7 camera, a HD capable miniDV prosumer camcorder that retails around £3,500. The kind of thing that professionals might sneer at, but still something I could only ever look at through the glass of a storefront. Being able to play with these toys is one of my favourite things in the world and something I am eternally grateful to the band for. Thanks guys!! 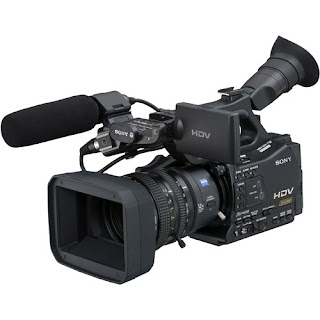 It's smaller than the previous Sony that the band had hired, and can be easily carried rather than requiring shoulder mounting. I found the layout and buttons pretty intuitive after using the older, larger Sony, and spent most of Friday lounging around the house, playing with the camera, shooting test scenes, packing my gear for the next day and reading through the manual page by page and playing with every function. It has a super smooth slow motion mode. Must resist the temptation to use that on every shot!! I filmed some slow motion footage of the kitten playing with his string toys, and of my girlfriend Deedee doing a funny dance (which she later called "stupid looking" when she saw herself in slow motion)
I didn't end up shooting any miniatures, deciding that I had enough on my plate and that the final shoot didn't actually need them, as while storyboarding I had excised a complicated scene involving miniature cars to cheekily replicate a no-budget car chase. I had enough to work on already without that, and I was a curious mixture of confident and anxious, feeling both excited and utterly unprepared. Tomorrow, Friday, would be the first day of shooting, two or three scenes shot at Mark's basement. Yet again, the two locations of Mark's basement and Pat Collier's studio at Perry Vale would be our prime locations. This time I hoped to do some set dressing and stage the shots so that it felt at least a little different! Saturday would be the big day of shooting at Pat's, and Sunday would be reserved for any overspill, but hopefully not required.
Also today, while taking a breather and walking the dog with Deedee, we came across some doors that had been left outside a renovated building, clearly to be thrown away. One of my scenes required an operating table and I hadn't been able to find anything that would work for the scene (that I could bring along to Pat's studio and set up inside easily enough) but this door combined with a solid chunky coffee table I had at home would be perfect! What a gift! I was feeling pretty good about the shoot now. We walked the dog home and then drove the car round the block and put one of the discarded doors in the boot. I chose the middle door of the three, to reduce the chances of dog pee!
After a very restful day spent playing with camera functions and filming things in slow motion, I packed my bags for the morning and went to bed.
Posted by BrindleFish at 20:22

Email ThisBlogThis!Share to TwitterShare to FacebookShare to Pinterest
Labels: explorers collective, half a glass, music video