Last Friday the Urban Bar in Whitechapel was playing host to Frau Pouch and the excellent Houdini, on a David Lynch theme night. This means outrageous costumes by band and audience, bizarre props and a Badalamenti soundtrack between the bands. It's a small gig run by decent promoters (Motherboy and Double Edge Scissor) who are in it for the music and not the money, who make sure the bands get paid every penny that comes through the door. Good people, good bands.

I've wanted to shoot a video with Houdini for a while, we even got into talks about doing a proper music video together but the London-Medway distance was too much of a hurdle. I decided to take this opportunity to tape them in their element. It would be great practice and I would get to give two of my favourite bands the gift of some live gig footage. Even better if that footage looked a little bit fucked up because the frontman is dressed as the sodden corpse of a raped and murdered prom queen wrapped in plastic. 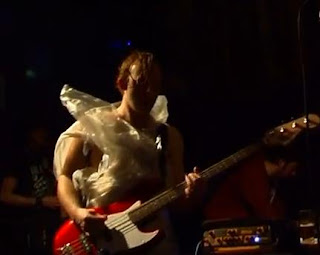 Last time I shot Frau Pouch live I used my Canon XL1S and two minidv camcorders held by two gracious volunteers. As the band was a three piece I assigned each cameraperson to a band member and then spliced the footage together afterwards. This time I had no volunteers so I had to set my two side-arm camcorders (one mine, one borrowed from the ever-gracious Greg Houdini) as static cameras while I used my main camera to get the interesting shots.

Initially I had trouble finding a safe place to set up two camcorders so I got mighty Macguyvery and gaffer taped my mini tripod to my lightweight camcorder tripod (the heavyweight tripod for my XL1S stayed at home) so that I could stand the tall tripod in one corner and have two cameras pointing in different directions, one for the band, one for the audience. I was pretty pleased with myself. The set up worked, but then the band relocated their stage position and a large space behind the band appeared. I knew that a better camera position had just presented itself so using my house keys (I must be better prepared next time) I sawed through the gaffer tape and peeled my contraption apart while trying to stay clear of the stage re-organisation. I set up the tall tripod behind the band, looking down over the drumkit and out into the audience. I set the mini tripod out to one side to capture the band side-on. This camera was in the audience area on an unused wooden chair, which would normally make me nervous but the venue was run by good people and I knew more than half the audience personally. Some of my closest friends were stood in the vicinity of the mini tripod so I wasn't too worried.

While these two static cams recorded constant footage I would use my main camera to get close-ups and more dynamic shots from multiple positions around the venue, so I would have a choice of three angles to splice together during editing.

The venue was small and didn't use a PA, except for vocals. The drums were unamplified and the guitar/bass audio came solely from the amps (often in larger venues the sound engineer would put microphones on the drums and amplifiers and control the sound from the sound-desk). This simple set up meant I didn't have to worry about annoying a sound engineer or knocking carefully placed mics over as I set up my tripods. I asked Joe to give me a two minute warning before they started so I could run around and turn on all the cameras. He graciously did.

Frau Pouch opened the night with a great set. Greg from Houdini played guest bass on the first track. Joe was dressed as the Log Lady from Twin Peaks, Greg as the washed-up corpse of Laura Palmer, Suzanne as Audrey Horne. After the first song Greg hopped off the stage and full time Pouch bassist Jim took over. I moved around the audience and the stage and got as many good angles as I could. Unfortunately my side-on camcorder died halfway through their set which was was my own fault for leaving the viewing screen on. I wanted to be able to see the footage when standing near the camera and I had no idea it would drain the fully charged battery so quickly, I guess it must be getting old. This left me with only two angles to assemble the rest of the set from. 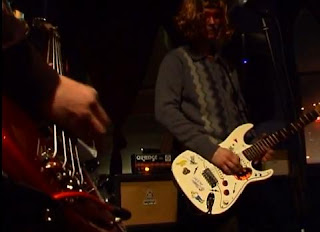 Sadly Houdini were down a member, but Greg was still playing the slot that evening, assisted by Joe from Frau Pouch and Matt (brother of Houdini drummer Tom) on percussive duties. They played a medley of Lynch music from various TV shows and movies. I captured their set with the two remaining cams.

I packed my gear, speed-drank a beer, got the penultimate train home from the venue around midnight withand went straight to bed. Poompf.


----
I worked on editing the footage over the last few days. As I mentioned one camcorder only caught half the set before dying. Sadly the first few minutes of another camcorder were scrambled. But the main camera looked good. It was dark at the venue, with not much lighting, but rather than boost the gain while taping (which I did for the previous Frau Pouch vid, with grainy results) I decided to leave the settings unboosted and have a better looking image, even if it was dark. For focus I set the camera to autofocus, knowing that both myself and the subject would be in motion and that lighting would be scarce. The autofocus may not always be perfect but it will work quicker than I can, and everything I'm filming is live, not staged, so I won't get another shot. For the video mix during editing, I used the main camera footage wherever possible, substituting it with camcorder footage whenever I was moving around.


The audio was not captured professionally but was a composite of all three cameras. It sounded pretty good, not crystal clear but it captured the live feel of the sound and the overwhelming volume pretty well. The main camera was balanced for the volume level, the other two camcorders (which have no such controls) were predictably overloaded. But layered together, it sounded good. The vocals get a little lost in the mix sadly.

Visually I feel the video is an improvement of the New Cross taping, even though a few things didn't go to plan, it still came out okay. The footage from the Canon ended up looking really great, better than before. I'm glad I didn't boost the signal with gain otherwise it would have been washed out and grainy.

Still need to finish the second part of the video, which is Greg's set. I think I'll also take one song from the Frau Pouch video (which covers the whole set) and put that up on youtube as a stand-alone video. People don't always want to watch a 22 minute full set, they want to hear their favourite song.

All in all, looking forward to doing more live recording. I'm really happy with how it all went.

Thanks for reading!
Posted by BrindleFish at 13:59