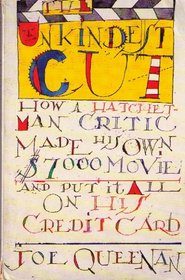 I bought this alongside several other seminal texts (see this blog post from Feb 2010) and it never really managed to grab me, so it kept getting left on the shelf. But it has finally been read!

It's by a  bombastic and egotistic (but very funny) film critic called Joe Queenan who hears about the infamous $7,000 budget for El Mariachi and decided to go one better and make his own self-financed movie for $6,998 in order to overturn the corporate paradigm, make a name for himself, and win a victory for all the average joes who thought that filmmaking was only for the Hollywood elite. All his cash is reserved for film stock, development and equipment hire. He gets neighbours to star in his film for free and uses local locations.

Of course, things snowball out of control very quickly. Queenan has never made a film before, and his cheerful experiment soon becomes a month of terror and dread, with costs exploding exponentially and spilling over all through post production. He loses friends and alienates neigbours, and documents every decision, catastrophe and breakthrough in detail in the book, which makes for compulsive reading.

Sadly the film is impossible to find, it would make the perfect companion to the book about it's genesis. If you've already read Rebel Without A Crew (Robert Rodrigues book about the filming of El Mariachi) then this is a great follow up. The two projects could have not have gone more differently!

It also makes me fucking glad that I work with digital video and not film. The cost is insanely prohibitive!

If you're interested, you can pick up the book through amazon marketplace:


The Unkindest Cut: How a Hatchet-Man Critic Made His Own $7,000 Movie and Put It All on His Credit Card - amazon