Been a bit of a while between updates.
HOUDINI

The big news is that I have got a new project, filming a music video for Medway noiseniks Houdini. They are friends of Frau Pouch, the band I filmed live a while back at New Cross. We're just in the planning stages at the moment, but it's exciting, and this is a first for me - to be filming a video for a band that I wasn't already friends with. This is the litmus test, my first foray into commissioned work. They are a tight, furiously talented band and I urge you to see them live if you get the chance. They play Medway and London on a semi-regular basis. Catch them with Frau Pouch if the opportunity arises, for a double whammy of filth and noise. 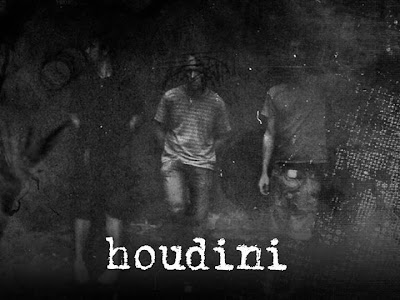 Check them out here: http://www.reverbnation.com/houdinisaur

So the new video is in the pipeline and I really want to use this opportunity to elevate the visual quality of my videos (only time will tell if the opportunity is utilised) so I have ordered a new light to illuminate my video subjects. I want to keep it simple and inexpensive, although I do admit I did have a browse through some "proper" lights with tripods and dimmers and barn doors and all that fancy malarkey - however, money is too tight to mention, as the wise man once said (before contradicting himself by talking about money money) and it behooves me to seek a more frugal measure. I have written before about worklights, and how I utilised a worklight I had bought several years ago (to illuminate a night-time barbecue party) as a possible film-making solution. Some of the budget film-makers on the net don't rate worklights as a decent lighting tool and insist that proper lights are the only way to go, and while some of that may be equipment snobbery, there is actually a valid argument here. This excellent little tutorial video makes clear points and actually proposes an even cheaper solution than worklights which works a lot better.

The video suggests using reflector lamps as a point light, the kind you might use to illuminate and heat a reptile vivarium. It's a simple average glass bulb in a metal reflector dome, and it comes with a clamp so you can fix it to objects. 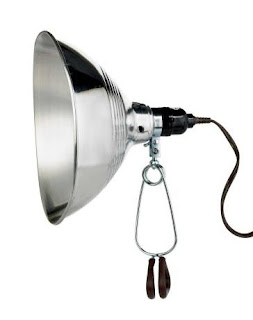 A far cheaper solution and a more controllable light than worklights, which can be a little overpowering as they are essentially halogen floodlights.

A top tip from the video is to use bulbs where the visible filament is small and straight, rather than curly, twisted or circular in shape. It means checking your bulb before you buy, but it means you get sharp crisp shadows (thanks to the straight filament) rather than the fuzzy, graded shadows that are caused by light rays being thrown every which way. I paid a little more to get a lamp that could take a bulb up to 250watts so I had the option to go bright. When the lamp arrives I'll let you know how it works! I'll be using it as a point light for the Houdini shoot and also next Monday, when I will be filming some footage of a theatre show performance for the Bacalao Theatre Company, a project I took on a little while ago.

Sofia, an old friend of mine and a talented performer, singer and actress is promoting her one-woman show, titled simply Sofia - The Show, an autobiographical piece about her childhood in Portugal and her life in London. What's interesting about the show is that it will take place in unusual spaces, such as people's homes which will be opened as public space. Sofia contacted me to help her and her director, Marianne, get a video sample of their work for their website, with the eventual aim of using the footage to show to possible backers to get funding for their new show. I filmed some footage of Sofia performing the show in a theatre space recently but time ran out on us, and I was really disappointed with the quality of the footage once I got it home. The room was dark and we had no extra lighting, so I had to use a wide open aperture, which when combined with the zoom meant that I had a really shallow depth of focus which made it hard to focus on Sofia as she moved about the stage. Sofia's vibrant red clothing - which looked fine on the viewfinder - came out bizarrely blocky and pixelated once I saw the footage enlarged. Another blow came in the form of the audio, which suffered from the loud air conditioning in the studio space. While human ears soon tuned out the drone, the microphone was not so kind. A little more experience (and equipment) and perhaps I could have taken steps to minimise this, but I learn hard lessons on every shoot I do.
Marianne and Sofia were both really great on the night and gave it their all, and I felt gutted that I couldn't give them something that reflected that.

I loved Sofia's work and both her and Marianne are really lovely genuine people, so I want to give them something that can benefit them. I hope I can salvage some footage of the performance and combine it with what we film on Monday. They've both worked so hard to organise all of this and I really want to help.

This may sound really obvious, but I am discovering that it's really not easy to do something well. It's difficult.

This project has not gone away, but has been put back a little. Not too much to talk about at this stage, things are still happening behind the scenes, and it all still feel a little vague and up in the air. I must admit, Mark from the Explorer's Collective has been prodding me for a meet-up, and I really should get together with him and talk about it. I've been keeping myself out of the loop because the guys involved have some stuff to work through - outside of the filming - and I don't want to muddy that. Time to catch up though.

This has also slipped into the background as I have been so busy lately... now I am worried that it will soon be too cold/dark/wet to be able to organise a large group of people for an outdoor filming session. I must contact Joe of Frau Pouch and have a chat.

Not video related, but I bought a bike last week, using my workplace cyclescheme. Should be picking it up in a few days. I'm unfit, overweight, and broke... so cycling should save me a lot of money on my exorbitant monthly train fares. Well, we'll just have to see how it goes! 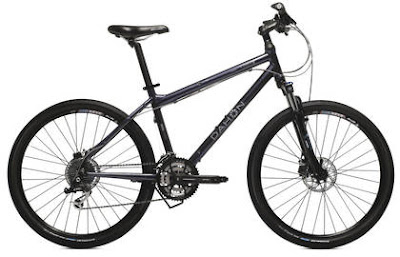